SUPERAntiSpyware – the name says it all. In a world of hyperbole, exaggeration, overstatement, and embellishment the SUPER, in this case, means just that.

Given the increasing number of Trojans, Spyware, Virus’, Phishing Scams, Identity Theft Scams, and other threats we now face, there is no one anti-malware tool that is likely to identify and remove all of this rogue malware that infests the cyber world. So to ensure maximum safety, it’s important to have layered defenses in the ongoing fight against system infection.

The free edition of SUPERAntiSpyware (last updated December 31, 2008), is an excellent choice, as a secondary line of defense in this battle. This free version of the award winning program, with its easy to employ interface, is used by millions of people worldwide to protect their computers. 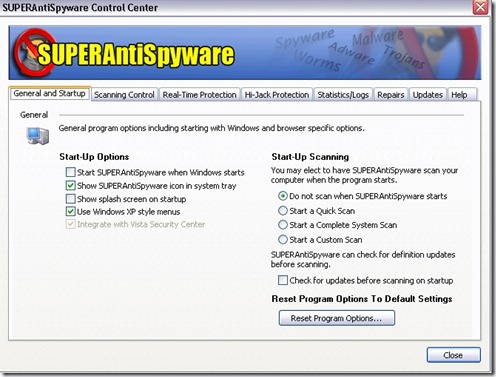 While SUPERAntiSpyware is well known for its high malware detection rate, it has not in the six months I have been testing it, discovered anything which the other anti-spyware programs, that I use have not found. This speaks to the high quality of many competing anti-malware applications, and not to any short comings in SUPERAntiSpyware.

A simple, intuitive, and easy to use interface makes SUPERAntiSpyware straightforward to setup, customize and run, for both less experienced and expert users alike.

One extra feature in this anti-malware product caught my attention however; a repair function which allows the user to recover settings frequently wrecked by malware, and which are often not recoverable despite removal of the malware process. These settings include Internet connections, lost desktops, the ability to edit the registry and frustratingly, access to the task manager. 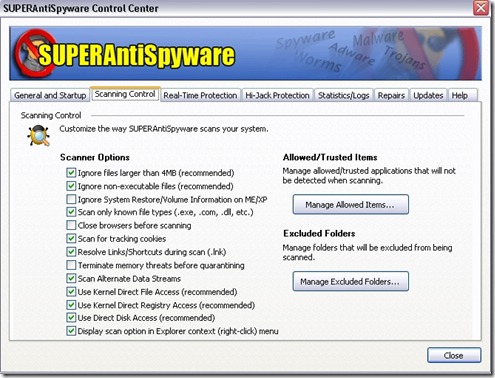 Since SUPERAntiSpyware does not provide real time protection against infection, like many free versions of anti-malware programs, I would not recommend then, that you use this free version of SUPERAntiSpyware as a stand alone security application since it simply will not offer you adequate protection. Instead, use it only as an on-demand canner.

Despite this real-time protection shortcoming in the free version, SUPERAntiSpyware deserves its reputation as a first class security application, and it’s definitely worth considering adding to your security toolbox as a secondary line of defense.

As a full fledged security application, with all of its features unlocked; real-time protection, scheduled scanning, and scheduled updating, SUPERAntiSpyware is very well priced at $29.95 US.

Easy to setup, customize and run

Free for personal use

Alternative free anti-malware applications reviewed, and downloadable, on this site:

Spyware Doctor Starter Edition from PC Tools is an excellent choice, as a secondary line of defense. This free version of the award winning program, with its easy to use interface, is used by millions of people worldwide to protect their computers; it’s reported there are a million+ additional downloads every week. Be aware however, there is no real-time protection offered with this version and this is the reason I recommend this application as a secondary scanner only.

Having tested virtually all of the major anti-spyware applications over the past year or more, I’ve settled, for now, on Spyware Terminator primarily due to its strong real-time protection against spyware, adware, Trojans, key-loggers, home page hijackers and other malware threats. Spyware Terminator excels in strong active protection against know and unknown threats. If anything, I find it perhaps a little overly aggressive. On the other hand, better this than the alternative.

AVG Anti-Virus Free now incorporates protection against spyware through a new combined anti-virus and anti-spyware engine as well as a “safe-searching component” which has been incorporated into the new AVG Internet Security Toolbar. This program scans files on access, on demand, and on schedule and scans email incoming and outgoing. I recently added this application to my Windows 7 (beta) machine, and to this point it has performed flawlessly.

Malwarebytes’ Anti-Malware is an excellent choice, as a secondary line of defense. The free version of this speed demon (it’s faster at scanning than any anti-malware program I’ve tested in the last 2 years), with its easy to employ interface, is used by millions of people worldwide to protect their computers.