“You’re Cheating Heart, Won’t Tell On You” – But I Might!

The Internet is hardly what one could call transparent. The Net, unfortunately, has any number of dark, murky sides – including anonymity. Anonymity which allows cybercriminals, trolls, flamers, hackers, spammers, phishers, malware pushers, and cyberbullies to flourish. I’m sure you can add to the list.

Now, we have cyberbullying taking to a new level – a website designed to out cheaters. Anonymously, of course.

Cheaterville.com, offers an opportunity for users to log onto the site, defame someone’s reputation and character, and do it anonymously. Just imagine – a  website where people can anonymously accuse spouses, friends, and even enemies, of infidelity. A perfect opportunity for the cowardly to attempt to destroy someone’s life without accountability, and without meeting a burden of proof .

The reality is – people cheat.

While I’m certainly not a defender of infidelity as practiced by well known connoisseurs of the cheating art – Arnold Schwarzenegger, Tiger Woods, Eliot Spitzer, and the like – nevertheless, the concept behind this site is nauseating and detestable.

Consider your reaction if you stumbled upon anonymously posted data, concerning you – as illustrated in the following taken from the site.

Remember this face when you are in SOCAL because if you see her out at a bar then you are most likely going introduce yourself and then 5 minutes later be getting oral from her in the bathroom. When will her clueless boyfriend find out what a skank his girl is. 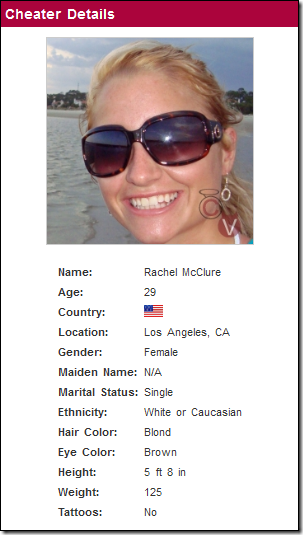 I dated this man for 5 years I gave him my heart and soul. I went through a hard time dealing with a rape charge he was the ony 1 here for me when i had no one. I gave him everything he wanted asking nothing for return. The money and time and love i spent on him. Later I find out not only did he cheat on me with tons of girls from other schools he then sleeps with my best friend he was caught in the act. Till this day he wont admit it he tells me im making it up and that im crazy coward even after we broke i still stuck up 4 him till the day he told me to drop dead and called me a crazy bitch all bc i moved on and didnt “wait for him to be of age for a serious commitment”

Cheats and steals from everyone.

She’s cheated on her ex-husband, another ex-fiance, and boyfriends before. She is a compulsive liar and will try and con her way into your life with the intent of getting to your wallet. The ex-husband and ex-fiance were both in the military and she cheated on them while they were deployed or in training. I’ve personally caught text messages of her in her lies and she was trying to be with other guys when we were together. Her father cheated a lot on her mother, so it runs in the family. Just stay away as she’s nothing but trouble.

What if the postings on this site aren’t true?

Hey, no problem. According to the morally wretched founder of Cheaterville.com – 90% of the “accused”  respond directly to the post, either denying it, or admitting to it.

Just in case you might think this sleazebag hasn’t though this through, in a recent interview he pointed out – “just like Facebook doesn’t validate anything that is posted on a wall – we don’t validate info.” Sure, you’re in the same league as Facebook – not!

Not one to pass up an opportunity to practice a little vertical integration, the primitive sleazoids behind Cheaterville.com have created an online dating service where cheated partners can seek out other cheated partners. Nice!

Unfortunately, as things stand at the moment, American website operators are protected from lawsuits for publishing defamatory statements posted by third parties. Defamation legislation in other countries is less clear.

I’m very supportive of the police (in most circumstances), and I’m well aware that they do courageous work. But, that support stops when unlawful petty tyranny is used to intimidate those who are engaged in exercising their right to protest against public policy.

The freedom to express an opinion, on public issues, is one of the most important foundation blocks of western democracy. That includes the right to protest against policies that some might consider pro-corporate policies of their government.

While Canadian Forces are fighting in Afghanistan, in defense of the right of the people of Afghanistan to choose democracy as their representative form of government, Canadians were recently exposed to their own government’s hypocrisy, writ large.

During the G20 summit held in Toronto in late June of this year, democracy took a beating – leading to the arrest of more than 1,100 protestors (including members of the media), who were then held in cages, open to the weather, for periods ranging from hours to days. All those held in these conditions, were denied access to legal counsel.

Common complaints by those who were held included – being left cold, hungry, without water, and without proper toilet facilities. A number of female protestors subsequently revealed, they had been sexually threatened by the police, strip searched, and taunted with threats of rape.

Virtually all of the caged protesters were released without charge, after having spent as much as several days in these conditions. Of those left facing charges, 6 have pleaded guilty to minor infractions, leaving 17 individuals still to be dealt with by the courts.

There are now a slew of ongoing lawsuits (totaling in excess of 200 Million dollars), claiming assault and battery, unlawful arrest and detention, malicious prosecution, and violations of constitutional rights under the Canadian Charter of Rights and Freedoms. As well, police conduct is now being investigated by no fewer than three separate government inquiries.

A reasonable person could conclude that the Toronto police overreacted, and engaged in the wholesale suppression of democratic rights during the G20 summit. A powerful representation of this overreaction was illustrated by the now infamous “Officer Bubbles” incident, in which a Toronto policeman threatened to, and then subsequently arrested, a young woman for blowing bubbles.

The cell phone video of this incident “Officer Bubbles”- From Bubbles to Bookings, has proven to be a big hit on YouTube.

As well, this incident has led to the creation of some rather pointed cartoons, staring Officer Bubbles, which are widely available on the Internet. 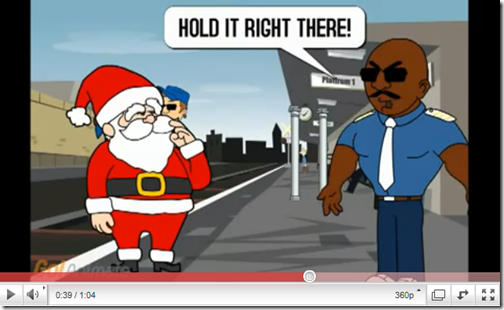 Taking things from the sublime to the ridiculous, Officer Bubbles – Adam Josephs – has now launched a Million dollar defamation lawsuit against YouTube, in an attempt to force YouTube to divulge the identities of those who made a series of negative online comments. According to the lawsuit, there are 24 identities being sought.

In a show of resistance to this patently absurd situation, scores of new comments (including the one below), have been posted – many of which challenge Josephs to add their names as defendants to the lawsuit.

I suspect that this lawsuit will never make it into court, and should it do so, it will be dismissed. Hopefully, Officer Bubbles will be reminded by the courts, that attempting to suppress an online community through bully tactics, is a non starter.

I can’t imagine, that in a democracy, the right to comment on public issues would be infringed. But then again, that’s where this article started.