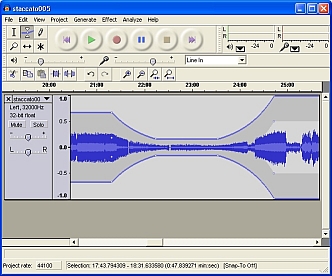 Several months back, I needed to record 20 minutes of streaming audio from the Internet, and since I am not an audio hobbyist, and have limited experience recording using my computer, I simply launched Windows Sound Recorder and sat back to watch it do it’s job. I thought! No such luck. I was surprised to learn the maximum recording time on Sound Recorder is only 30 seconds, which was far too short for my purpose.

A mad scramble to find a freeware/open source replacement for Windows Sound Recorder led me to Audacity 1.3.2 which, as it turns out, is the most popular free, open source audio editor/ recorder available. It works with many operating systems, including Windows, Mac, GNU, and Linux.

Audacity turned out to be easy to use, and I found it to be feature-rich and flexible. The first thing that struck me on launching the program was, it advised me I had several hundred hours of available space on my drives in which to record. Not 30seconds!

Audacity has the capacity to handle multi-track editing, a good number of audio effects including reverb, delay, compression, echo, phaser, wahwah and reverse. Its audio export functions include MP3, OGG, AIFF, and WAV and more.

One of the more interesting features, for me, is Audacity’s capacity to convert tapes and records into digital recordings. I have a large collection of old 60’s and 70’s albums that I have many times considered converting to digital recordings and burning to CD’s. I now have the application to do just that. Now, if I can only find the time!

Note: Audacity does not currently support WMA, AAC, or most other proprietary or restricted file formats.

Other built-in effects include: