Yesterday, I posted an article on BootMed, a Ubuntu Linux driven set of recovery tools which is a worthwhile addition to any techie’s toolbox. One of the recovery tools packaged with this free Live CD is TestDisk – which includes the file recovery application PhotoRec.

In previous reviews, I’ve covered more than a few file recovery tools,  some of which have lived up to the developers’ claims – but, most have not. PhotoRec, on the other hand, (despites its name, it’s capable of recovering 390 types of files according to the developer), performed far outside my expectations.

In the following review, I’ll describe how easy it was to recover deleted photos from my camera’s SD Card and, deleted music files from my iPod. As you’ll see, this application is not wizard driven – but, despite that, it’s still very easy to use.

First up was a recovery attempt on an iPod.

On launching the application, the connected iPod was immediately identified.

Selecting the drive was a simple matter of cursoring down, and pressing the Enter key.

All recovered files were saved to the recovery directory – as shown below.

Each and every recovered music file was playable – as shown in the following screen capture. 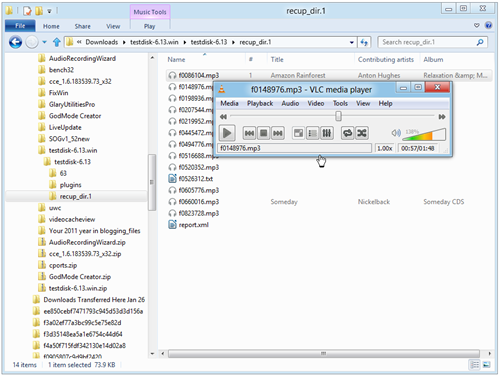 Next up – photo file recovery from my camera’s SD card.

In the following screen capture, I’ve illustrated the files Windows Explorer  identified on the SD card prior to the recovery operation. 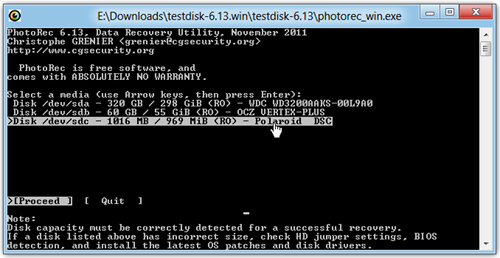 The application “did its thing” and recovered 86 previously deleted pics.

The following screen captures shows not only the photos that were recovered, but a number of recovered sound files and text files as well. I’ve highlighted one recovered photo file for illustrative purposes.

The recovered photo (selected in the above screen capture), is shown below opened in IrfanView. As you can see from the Image properties box, all of the file properties have been recovered intact. 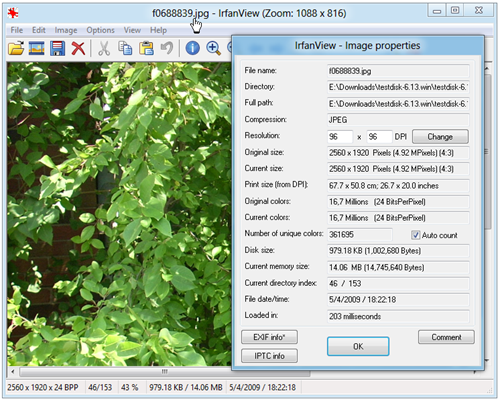 TestDisk – which includes PhotoRec – is in fact, a portable application and, does not require installation. Simply unzip the file and you’re good to go.

When it’s time to recover deleted files from an SD Card, Hard Drive, Flash Drive, etc., this powerful recovery application, (despite its command line interface), makes deleted file recovery just about as simple as it gets. It may even be suitable for those users who might not qualify as “expert”.