Scareware is Destroyware – Not Just Malware

Scareware is a particularly vicious form of malware, designed specifically to convince the victim to pay for the “full” version of an application in order to remove what are, in fact, false positives that these program are designed to display on the infected computer in various ways; fake scan results, pop-ups, and system tray notifications.

According to Panda Security, approximately 35 million computers are infected with scareware/rogueware each month (roughly 3.50 percent of all computers), and cybercriminals are earning more than $34 million monthly, through scareware attacks. 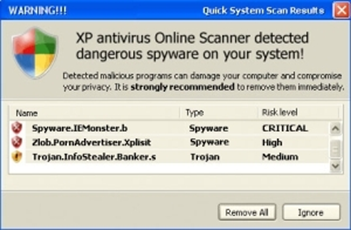 Delivery methods used by these parasites include Trojans, infected websites, misleading advertisements, and Internet Browser security holes. They can also be downloaded voluntarily, from rogue security software websites, and from “adult” websites. As one of my friends put it “It’s easy to be bitten by a dog like that”.

The average computer user that I speak with informally, has no idea that rogue applications exist. But they do, and cyber crooks are continuing to develop and distribute scareware at a furious pace; there are literally thousands of variants of this type of malware currently circulating on the Internet. It’s fair to say; distribution has now reached virtual epidemic proportions.

Having watched the development and deployment of scareware over the last few years, and having noted the increasing sophistication of the current crop of scareware applications, I have come to the realization that scareware removal instructions have limited value, except perhaps, for the most technically sophisticated computer user. A reformat and a system re-install, are more than likely in the cards.

Yes, I know, there are literally hundreds of sites that will walk you through the process of attempting to eliminate this type of scourge, but simply put – if your computer becomes infected with the current scareware circulating on the Internet, you are, in most cases, wasting your time attempting to save your system.

If you doubt this, take a look at Trojan War Resolution: The Battle Won, in which Larry Walsh of eWeek, describes a three day marathon system recovery attempt which was ultimately successful, but…..

The best advice? Have your PC worked on by a certified computer technician, who will have the tools, and the competency, to determine if the infection can be removed without causing system damage.

If you have become infected by scareware, and you want to try your hand at removal, then by all means do so.

The following free resources can provide tools, and advice, you will need to attempt removal.

Bleeping Computer – a web site where help is available for many computer related problems, including the removal of rogue software.

SmitFraudFix, available for download at Geekstogo is a free tool that is continuously updated to assist victims of rogue security applications.

What you can do to reduce the chances of infecting your system with rogue software.

Consider the ramifications carefully before responding to a Windows Security Alert pop-up message. This is a favorite vehicle used by rogue security application to begin the process of infecting unwary users’ computers.

Be cautious in downloading freeware, or shareware programs. Spyware, including scareware, is occasionally concealed in these programs. Download freeware applications only through reputable web sites such as Download.com, or sites that you know to be safe.

Install an Internet Browser add-on such as WOT (Web of Trust), an Internet Explorer/FireFox add-on, that offers substantial protection against dangerous websites.

29 responses to “Scareware is Destroyware – Not Just Malware”