A  quick recap on disk fragmentation: What is it?

Fragmentation is caused by creating and deleting files and folders, installing new software, and downloading files from the Internet. When you delete files or folders, the first available empty spaces on the Hard Drive are filled in randomly when you create new files and folders, as you do when you save pics from your camera, install software, save emails, or create documents.

My Hard Drives are continuously being defragged. I run the paid version of TuneUp Utilities 2010 in the background which continuously optimizes, amongst other things, my computer’s hardware, including automatic disk defragging.

If you think this is overkill – fair enough. But, the application can do it, it does a great job of doing it, and I’m a fan of “set and forget”.

The latest release (November 18, 2009), of the highly regarded free system tool, Auslogics Disk Defrag 3.1, can also be run on a  “set and forget” basis. I occasionally hear from users that they can’t remember the last time they defragged their disk/s – but they’ll get to it – eventually. But they don’t have to – Auslogics Disk Defrag 3.1, can do it for them on a continuous basis. 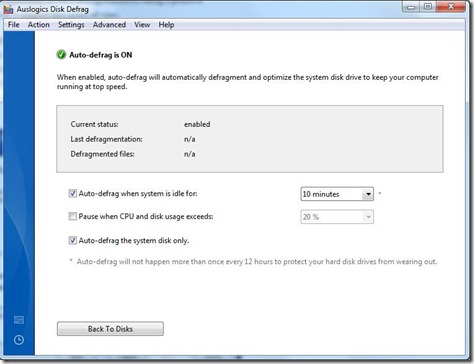 Despite the fact that their is some disagreement as to the value of defragging modern Hard Drives, there is a slight leaning in the tech community toward defragmentation being a positive maintenance process. I support this point of view.

Almost 5 million downloads of this application from CNET, and an average user rating of 4.5 Stars speaks to the value of this small application and to the popularity of defragging.

The last time I reviewed  this application in August, 2008, the CNET download total stood at just over 2 million. This major increase in the number of downloads is a considerable proof statement that this application deserves a place in your toolbox.

Auslogics Disk Defrag is extremely easy to use, does not require any analysis phase and is faster than most disk defragmentation software I’ve tested in the past, and best of all, it’s free.

The user interface is uncluttered and as simple to follow as any I’ve seen. The following graphics illustrate just how easy it is to get Auslogics Disk Defrag up and running.

There are loads of free disk defraggers available for download, but they are not necessarily all created equal. The following graphic illustrates some of the difference between Auslogics Disk Defrag, and a number of other free apps you may be familiar with.

Before you begin a scheduled defrag process I recommend that you run a program such as CCleaner, which will empty your Recycle Bin, Temporary Internet Files folder, and other locations where clutter tends to accumulate on your PC.

As well, you should consider uninstalling any applications you no longer use. Revo Uninstaller is a free utility that will uninstall unneeded applications more thoroughly than the Windows native uninstaller.

These steps are not absolutely necessary but, they are a good practice.

Increase your productivity – no more waiting for files to open

Fast and safe defragmentation of the disk drives

If you enjoyed this article, why not subscribe to this Blog via RSS, or email? It’s easy; just click on this link and you’ll never miss another Tech Thoughts article.