So here’s a thought – if 52 percent of the nearly 37,000 samples of new viruses, worms, Trojans and other types of Internet threats PandaLabs analyzes every day, only last 24 hours, how do security applications that rely on a definition database to identify malware files (most anti-malware applications), keep up with this onslaught? The simple answer is; they don’t.

This relentless evolution of increasingly more powerful and destructive attacks against home computer systems, emphasizes a gaping hole; a vulnerability to zero-day threats, that exists in many users’ Internet security defenses.

Zero-day threats are those that are defined as malware that has been written and distributed to take advantage of system vulnerabilities, before security developers can create and release counter measures. Without tools that will identify and eliminate these threats to your computer, you run an increased risk of infection.

A powerful free tool, ThreatFire from PC Tools – the developers of the highly regarded Spyware Doctor, blocks malware (including zero-day threats) by analyzing program behavior (heuristics), (based on the theory that if it looks like a crook and acts like a crook, then it must be a crook), instead of relying only on a signature based database.

ThreatFire works together with your signature based security applications to increase the effectiveness of your total security arsenal. 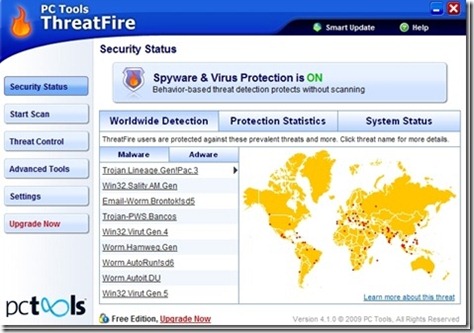 When ThreatFire detects a behavior based threat, it goes into analysis overdrive by comparing the threat against its signature database; those threats that are recognized by the database are quarantined immediately. 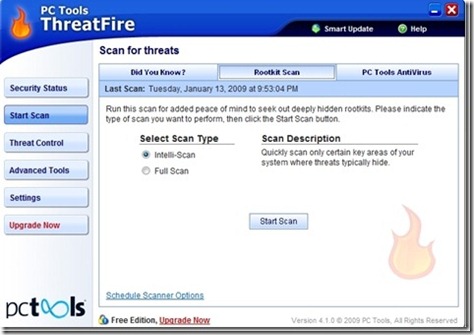 Unrecognized threats, or unrecognized behaviors, are assigned a calculated risk level (set by the user), at which point the user has the option of confirming, or blocking the action.

A good example of the effectiveness of this application was made clear to me, recently, when I was checking all of the ports on my home Windows machine, something I do frequently, and ThreatFire immediately advised me that the Port Checker was attempting to send email from port 25.

Of course it actually wasn’t, it was simply opening it for testing purposes. But if this port was being opened, and was being used by malware, ThreatFire would have identified this danger by its behavior, and given me the necessary warning. 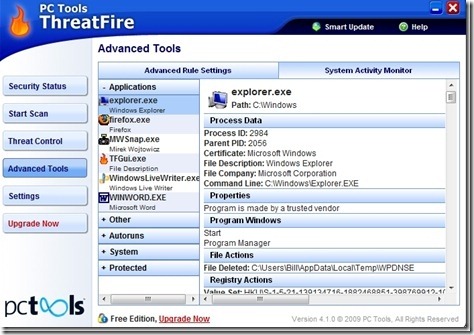 Immediately Effective with No Complicated Set Up

Proactive Defense against Both Known and Unknown Threats

Quarantine and Permanently Remove Threats from Your System

Complementary to Your Existing Antivirus Software

Virtually No Impact on System Performance

In addition to the “normal” system protection you have installed locally, I strongly recommend that you download and install ThreatFire.

Make sure you understand the risks involved in surfing the “wild west” Internet we now have to contend with. Check out “Basic Computer Security Precautions You Need To Know”, on this site.

Note: It works very well on my Windows 7 (RC) system.

If you enjoyed this article, why not subscribe to this Blog via RSS, or email? It’s easy; just click on this link and you’ll never miss another Tech Thoughts article.