Love WOT And It Will Love You Right Back!

I know that many of my regular readers have been wondering just where I’ve been for the last few weeks. So, let me fill you in.

Every year, usually in December, I donate my tech services, for several weeks, to a number of organizations that provide computer systems to disadvantaged families.

As part of that process, I generally provide system setup and basic instructions on Internet use, with a particular emphasis on Internet security.

This year, as part of that process, I installed WOT (Web of Trust), on each computer I hooked to the Internet, after which I gave a brief demonstration on the powerful impact WOT can have on the safety, and security, of the attached system and the user.

In each case, I was struck by the level of enthusiasm generated by the addition of this small Internet Browser add-on to the client’s system, after a demonstration of web surfing both with WOT, and without WOT. To say that every client felt reassured, and more confident about surfing the Internet, would be to understate the impact WOT had on these people.

There are many reasons why I offer my services gratis for two weeks in December every year, not the least being that in doing so, I get a refresher course on the true state of current computer users’ competency and knowledge, unaffected by outside influences.

A number of times, in the past year or so, I’ve written about what I consider to be the massive disconnect between the reality of a typical computer users level of competency, and the views held by operating system and application software developers, who truly believe that there is a great tech savvy generation out there in the wild blue. My disagreement with this view increases every year.

This disconnection in reality, particularly as it applies to Internet security and safety, is the principal reason why I insisted on installing WOT on every system I came into contact with this year. If you’re unfamiliar with WOT and the protection it offers, then read on and you too might just fall in love.

WOT is a free Internet Browser resource that has established an impressive 4.5/5.0 star user rating on CNET, and has become one of the most downloaded FireFox Add-ons at the Mozilla add-on site.

Here’s a Google search in which WOT indicates which sites are safe. Notice the unsafe sites in the Google ads! 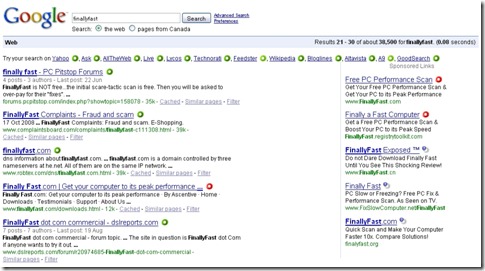 As an added safety feature take a look at what happens if, in fact, you do end up on an unsafe web site. WOT’s dropdown warning current blocks access to the site until you determine otherwise.

WOT operates in a unique fashion in order to offer active protection to the Internet user community. It stands out from the crowd of similar applications, by soliciting the opinions of users/members whose views on web site safety are incorporated into the overall site safety rating. According to WOT, the user community now has reputation data on over 20 million sites worldwide.

The advantages of user participation in exchanging their personal knowledge regarding a web site, in my view, cannot be overemphasized. It allows for a new and exciting trend in Internet security, and that is the concept of “people driven security”. A concept that encompasses the philosophy, that we are all responsible for each others security on the Internet.

WOT recently added the top three web-based email services – Google Gmail, Windows Live Hotmail and Yahoo! Mail, to its free security protection. You can now feel more confident and secure since WOT checks links embedded in your email, and warns you of dangerous web sites so that you can avoid spyware, spam, phishing, identity theft and other Internet scams; before you click on dangerous embedded links.

The Browser add-on icon, displays a color rating for each site you visit, indicating whether a site is safe to use, should be used with caution, or avoided entirely. Using traffic light colors, (green, yellow, and red), WOT leaves you in no doubt as to the safety rating of a web site. An impressive feature of WOT is the dropdown transparent warning curtain, shown earlier, triggered on visiting a dangerous site.

Recognizing that up to ten percent of Internet users are at a disadvantage however, due to colorblindness, and cannot rely on an Internet safety system based on color coding, the Web of Trust development team recently released an adaptive version of WOT. This version incorporates equivalent alternative information, through assistive or adaptive technology, for colorblind users.

This colorblind accessible application provides the same critical benefits to those individuals who have to contend with visual impairments, as it has to those of us who have come to rely on WOT as a major defense against the pervasive hazards we encounter on the Internet.

Esa Suurio, CEO of Against Intuition Inc. referring to WOT’s development, stated in part “Our goal is to make the Internet a safer place for everyone”. You too can do your part in enhancing protection for all Internet users, by installing WOT.

Ratings for over 20 million websites

The WOT browser add-on is light and updates automatically

Settings can be customized to better protect your family

Works with Internet Explorer and FireFox

Surf more securely by installing this browser add-on which will provide you with an in-depth site analysis based on real world results. Keep in mind however, that you are your own best protection. Stop · Think · Click

Watch a demo video showing how WOT works in practice.

10 responses to “Love WOT And It Will Love You Right Back!”