When we think of kidnapping, extortion or blackmail, I think it’s safe to say, not many of us would consider that a popular Web Site could be kidnapped and held for ransom. But that’s what it appears has happened to Makeuseof.com, a very popular Web Site that specializes in Cool Websites, Cool Software and Internet Tips.

As a contributing writer for Makeuseof.com, I need access to the site in order to post articles. This morning however, when I attempted to login to the site, I found that Makeuseof had disappeared off the map. Gone, vanished; nowhere to be found. Web sites of course, can go down due to all sorts of technical issues.

But no technical issues proved to be connected with the disappearance of Makeuseof. After just a few minutes of investigating, I was taken aback when I learned that the Makeuseof domain had been stolen! 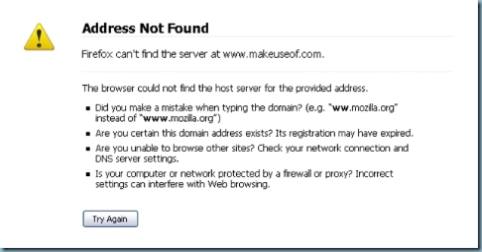 By following the threads on this, I discovered the site’s ownership/domain had been transferred from GoDaddy, to NameCheap, each of which is a web registrar company.

As Mark O’Neil, Managing and Publishing Editor of Makeuseof explains it “The problem was quickly traced to our GoDaddy account and we found out that it had been hacked by someone. The hacker had transferred ownership of the makeuseof.com domain from the GoDaddy account to another web registrar company called NameCheap.

Looking at the emails now we can say that it took him less then an hour to do that. The WHOIS entry is here and you can see that it is an Ali Ferank in Dubai. That’s our bad guy.

We can now confirm that the attacker, in fact, got the access details through Gmail and set up a forward filter to send incoming emails from GoDaddy to another Gmail account. Now the account had a strong approximate 15 character long password. How the hell did he manage to get in? Is it another Gmail Security Flaw?”

The thief, Ali Ferank, an alias without doubt, has since contacted Makeuseof demanding $2,000 to restore ownership of Makeuseof.com to its rightful owners.

Mark has raised some penetrating questions with respect to the hasty compliance to the transfer of the domain by GoDaddy that need immediate and substantive answers. As Mark asks “Why did GoDaddy go so fast? In fact in the transfer confirmation email that we received from GoDaddy, it stated that we have 3 business days to cancel the transfer. However, when we logged into the account the domain was already moved, in less then an hour. Is it THAT EASY to snatch the domain from GoDaddy?”

The position on this kidnapping and extortion plot, taken by Makeuseof, as expressed by Mark O’Neil is one of defiance “We are not going to pay. We are not going to give into these kinds of people. We work hard for our money and we are not going to hand it over to criminals looking for a quick payday. If we have a spare $2000 available, we would much rather give it to our hard working writers who deserve it”.

For updates on this continuing story, checkout Makeuseof’s temporary home on Blogspot. If this situation continues longer than is currently anticipated articles will be posted to this temporary site.

7 responses to “Makeuseof.com Web Site Stolen and Held for Ransom”