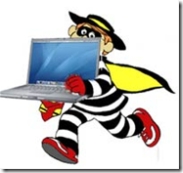 You’ll never lose your Laptop computer, and you take particular care to ensure it won’t be stolen, right? Of course you do. But does loss, or theft, of laptops happen? You bet.

Recent survey results from the Ponemon Institute, indicates that more than 10,000 laptops are lost, or stolen, each week at U.S. airports. Are you as surprised as I am?

Not surprised? Well, how about this astonishing statistic from the same survey: 65% of those lost or stolen laptops are not reclaimed, despite the fact that half the laptops contain confidential corporate information.

One can only hope that the data on these laptops was encrypted, although it seems when we read news stories about a lost or stolen laptop, the pattern seems to be as follows; – 200,000 (insert your own number here), bank account numbers, Social Security Numbers, names, addresses and dates of birth were on an unencrypted laptop stolen/lost earlier this week.

Other available statistics indicate that a laptop is stolen, not lost but stolen, every 53 seconds and 97% of stolen laptop computers are never recovered.

So what can you do to increase the probability that should your laptop be lost or stolen, you can increase the chances that it will be returned to you, than the above statistics indicate?

Adeona (named after the Roman goddess of safe returns), is a newly released small software client for tracking the location of a lost, or stolen laptop, that does not rely on a proprietary central service, but instead, is offered free by the Open Source community.

Adeona is designed to use the Open Source OpenDHT distributed storage service to store location updates sent by a small software client installed on an owner’s laptop.

The client continually monitors the current location of the laptop, gathering information (such as IP addresses and local network topology) that can be used to identify its current location.

The client then uses strong cryptographic mechanisms to not only encrypt the location data, but also ensure that the cipher texts stored within OpenDHT are anonymous and unlinkable. At the same time, it is easy for an owner to retrieve location information.

Private: Adeona uses state-of-the-art cryptographic mechanisms to ensure that the owner is the only party that can use the system to reveal the locations visited by a device.

Open source and free: Adeona’s software is licensed under GPLv2. While your locations are secret, the tracking system’s design is not.

The Mac OS X version can capture pictures of the laptop user, or thief, using the built-in iSight camera.

For a review and download links to free encryption software read “Lose Your USB Stick and You Lose it All – Encrypt Now with Free Software!” on this Blog.